A little over a week ago I ran The Color Run Shine with my team Gronk’s Pet Unicorns. The run was located at Gilette stadium .. See the association there 😆? I had done a color me rad a couple years ago but this one was the first from this company. I was pretty excited they incorporated a glitter time zone. Everyone needs a little sparkle in their lives.

First unfortunately: the negative. Packet pickup was a mess. They had offered two days prior but both at Gillette in Foxboro and since we had a busy weekend we couldn’t make the 45 minute drive up there. Apparently the color run thought more people would take advantage of the other days because we waited at least an hour in line. There was music playing and enough of us so it wasn’t too bad we could switch out to go to the bathroom, shop or gets snacks. When we finally got up there to get our bib no one had us sign a waiver and no one checked our IDs even. Probably because they just wanted to get people through the line but still concerning. There were no tags on the bib to denote we had people picking up shirts either and unfortunately I witnessed people taking advantage of that.

We eventually met up with the rest of our team:  my friend Erin and her family.  This is most of us pictured below sans my cousin, not sure where she went off to.

The run. They had a DJ type guy at the starting zone pumping us up with music and throwing out swag. There were two different waves: just running or run/walk/cartwheel. We signed up for the latter. We took off an and split into two groups: my cousin, aunt and I and my friend and her family. Even from the start the course (around Gillete stadium/Patriot place/practice fields) was so wide that we had plenty of room to run. My cousin runs track and my aunt who is training for her first half were tough to keep up with with on top of the crazy heat+humidity (Lymies hate heat) but I tried. The color zones were plentiful and the volunteers dolled it out in condiment type bottles as opposed to just packets like in color me rad so we could way better colored. Also they had tarps on the side to roll in. This is where the Color run wins major points over color me rad. Also the “shine zone” that came somewhere around mile 2 was more of a cool sheen than glitter, pretty neat. 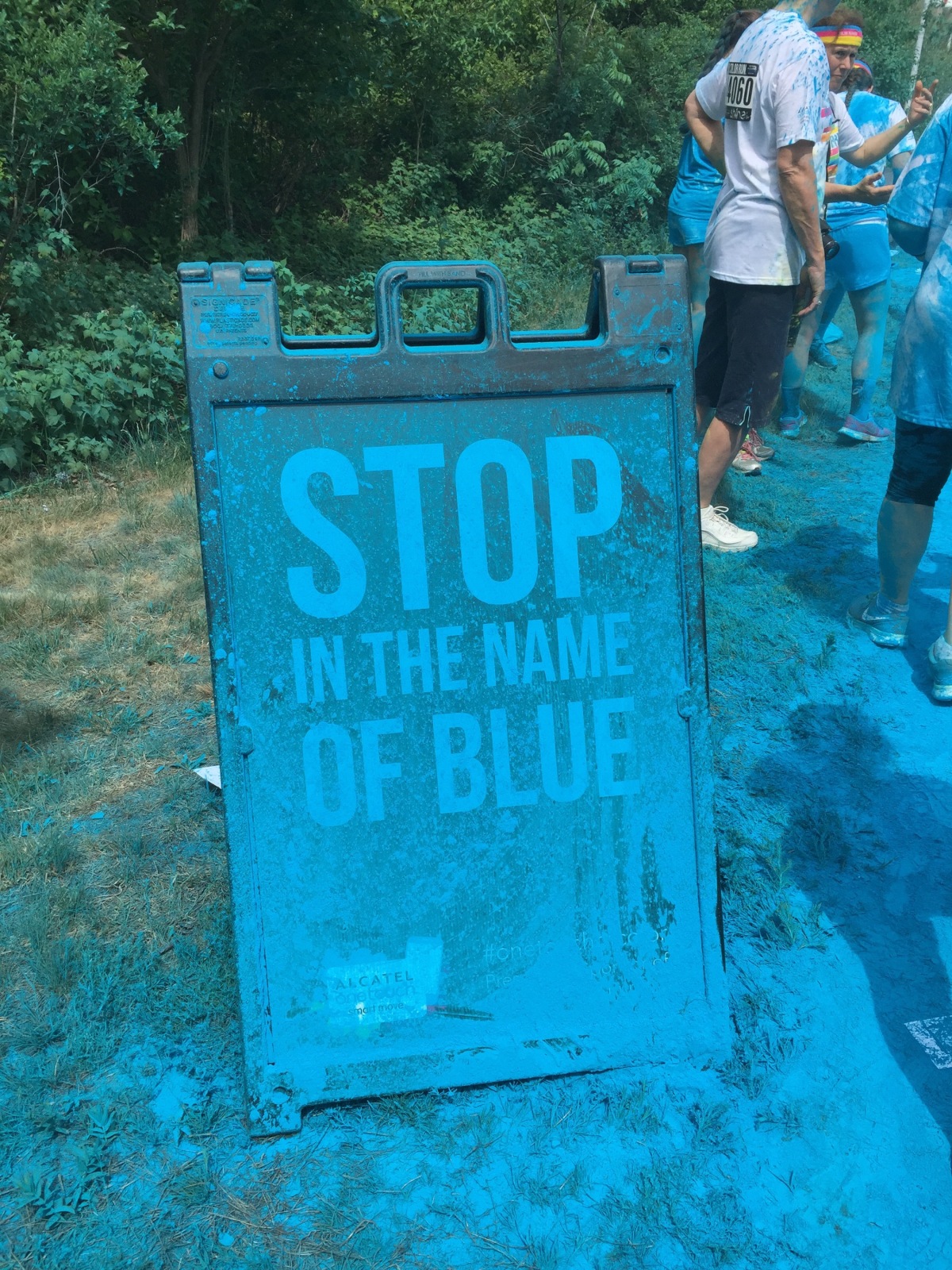 There weren’t a lot of photographers on course but I did see them at the finish shoot which was filled with music and cheers. Another 5k fun run complete:  take that Lyme.

Brady love:  there were lots of support for our awesome (and innocent I may add) quarter back including myself who had #freebrady in face paint on my arms.

That’s our medal we got at the finish… 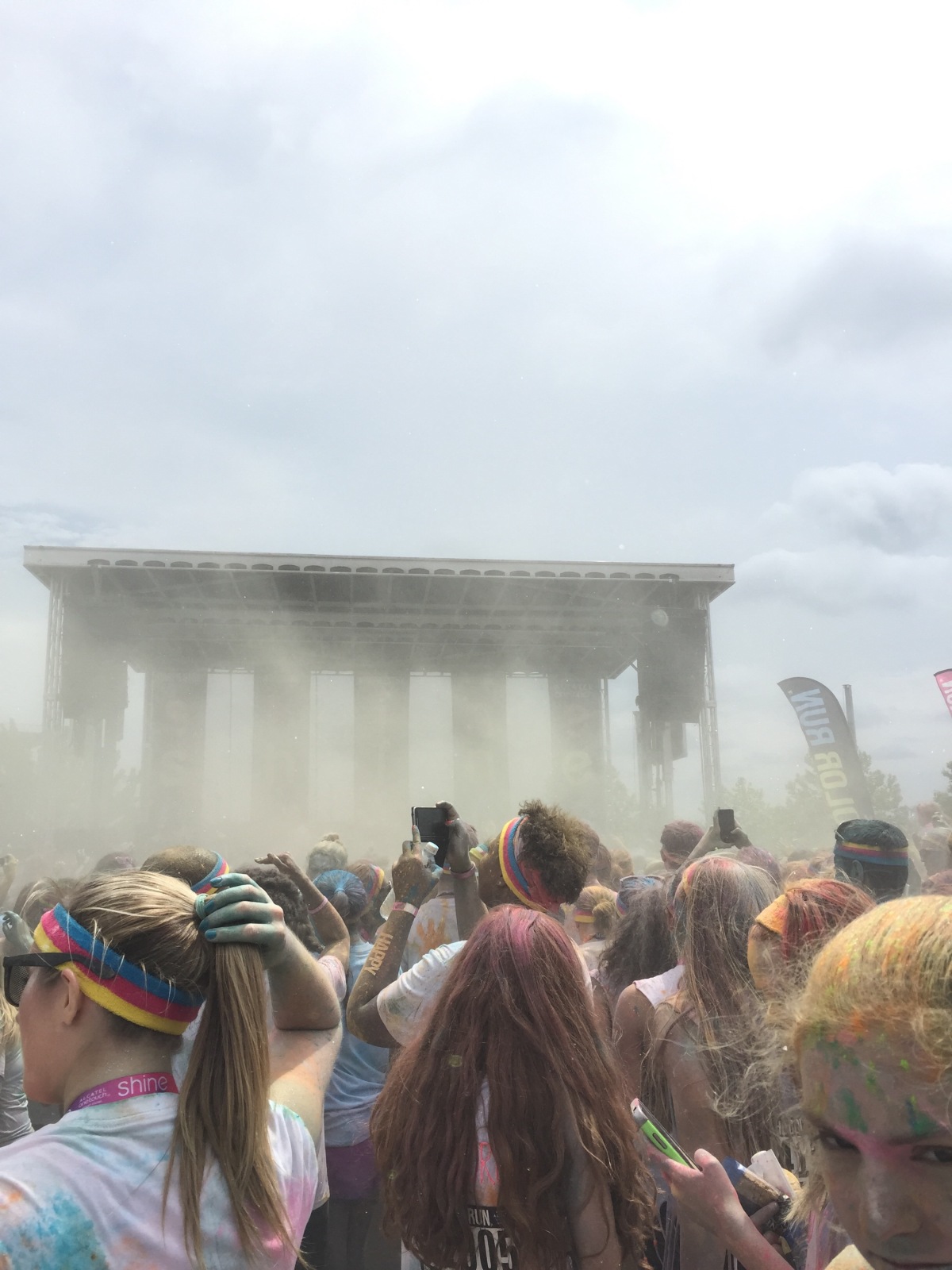 Overall a very good time. These runs are very relaxed and perfect for your first 5k, a good time with family/friends or if you’re dealing with a chronic illness like me and want to get out for run/walk and not have the pressure of having it be a timed run you need to push through.

Grade A-. With 10,000 runners (the MC at the start quoted this) they needed more volunteers at the packet/t-shirt pick up. It got a little chaotic. Other than that it was great:   tons of color, enthusiastic staff, cool medal, music and plenty of space to run if you wanted to.

Get our there and give it a try😎.
Next up:  I’ll have a happenings post of my first full month in Massachusetts and not in the desert hurray!